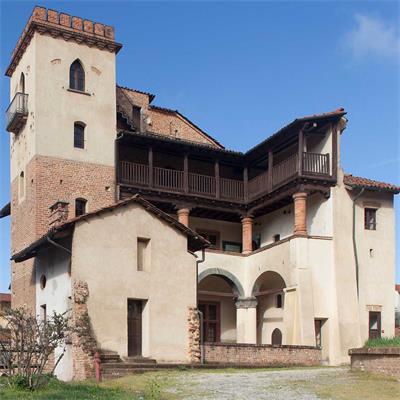 The construction of the original late Gothic core of Palazzo Traversa, dates back to  the middle of the 15th century, it  is traditionally attributed to a branch of the noble Malabaila family of Asti who moved to Bra, which would later succeed the Operti and Albrione.
The building is reproduced for the first time (1666) in the engraving of the Theatrum Sabaudiae that represents the city of Bra; later modifications and enlargements are found in the land registers of 1760 and 1811 and in a plan of the city of Bra in 1893. The tower above the corner of the boundary wall was added at the end of the nineteenth century by the initiative of Don Giacomo Traversa, then owner of the building.
In 1935 the palace was donated to the City of Bra specifying that it was bound to be a museum and for this purpose it was subjected to radical restoration in the 1980s.
The brick façade features three rows of double lancet windows, surrounded by terracotta tiles in the first two floors and in the last one by a white plaster frame marked  by ribbons at the height of the window sills.
In the southern façade there is a sundial, which was fresco painted in 1842.
On the eastern part on the inner courtyard there are three orders of galleries: large  round arches in plastered masonry on the main floor,  brick columns on the second floor , which support the wooden structures of the surviving balcony on the last floor.
Inside the palace we can see the coffered ceilings in the hall of the main floor and in some of the rooms. The frescoed coat of arms of the Albrione family can still be seen in the porch on the main floor, whereas in the decorative band  under the existing wooden ceiling of the living room on the second floor the  coats of arms of the Brizio, Malabaila and Pasero families are painted.