The “Craveri” Museum of Natural History in Bra also participates in the Planet Earth Week, an initiative now in its tenth edition, with more than 1800 geo-events held in over 650 Italian realities.
On Friday 7 October 2022, at 5.30 pm in the Museum in via Craveri 15, the conference "Lessons from the past to look to the future: reading the rocks of Piedmont in Bra to understand climate change" will be held.
During the meeting - open to all and organized in collaboration with the Department of Earth Sciences of the University of Turin and the Cassa di Risparmio di Torino Foundation - the palaeoclimatic information contained in the rocks of Piedmont emerging near Bra, and the their importance with respect to understanding the climate change of the geological past and the current one. Past climate and environmental changes recorded by marine sediments will be presented, and their importance for tracing current climate evolution and impact on living beings will be discussed. We will also talk about the effects already visible in Piedmont of the ongoing climate change, thus expanding the discourse from oceanic masses to emerged lands; we will deepen the close links between the ocean and the emerged lands, with particular attention to the circum-Mediterranean area. Admission is free. 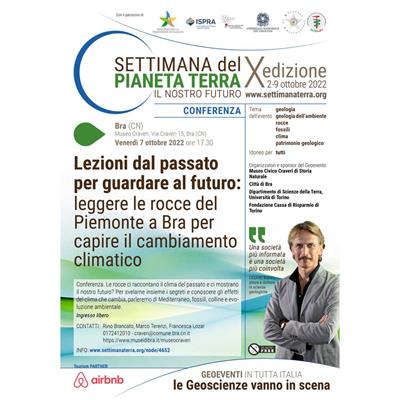