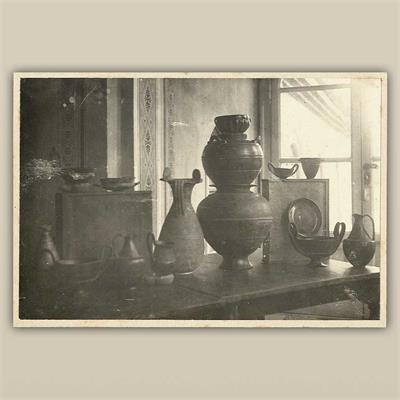 In the speech for the opening of the Museum in 1919 Euclide Milano mentions a series of "different antiquities"; among those still present in today’s collections we can find: "black paint" pottery produced in the Greek colonies of southern Italy (4th-5th centuries B.C.), vases for oils and perfumes (an Attic lekythos of the 5th century before Christ and two Corinthian aryballoi, 7th and 6th centuries before Crist) and two Messapic "trozzelle" (vases with raised handles decorated with discs; Puglia, 4th century before Christ.).
An Attic amphora with black figures, a phoenician-punic stele with the figure of the goddess Tanit and some Etruscan bucchero (vases used for banquet) are likely to come from the Museum Gallery of the Royal castle of Pollenzo, enriched with archaeological finds of different origin from Carlo Alberto’s.
In addition to the varied collection of relics and documents, the legacy of Don Giuseppe Tornatore includes a group of pre-historic and Roman archaeological finds found mainly in the area of Varese, where the priest worked for many years, before returning to his hometown Bra.
Thanks to the good work of Edoardo Mosca, some finds coming from the funerary sets of the necropolis of the Etruscan city of Felsina (Bologna) have been granted in deposit by the Civic Museum of this city (1955-1957) in memory of the archaeologist of Bra Edoardo Brizio. In addition to the pottery of the Grotta del Farneto, there are materials from the necropolis Benacci-Caprara, Romagnoli, Arnoaldi and the Military Arsenal and objects from Gallic tombs. Among the artifacts believed to come from the collections of Casa Savoia we can appreciate an Attic amphora with black figures, restored in 2002 by adding it to the fragments kept in the museum. Characterised by a reddish clay, typical of Attica... DISCOVER The legacy of Don Tornatore (1955) includes, in addition to objects of artistic and historical interest, also a number of archaeological finds. The finds dating back to the Neolithic come from Isolino di Varese (where the priest worked for many... DISCOVER